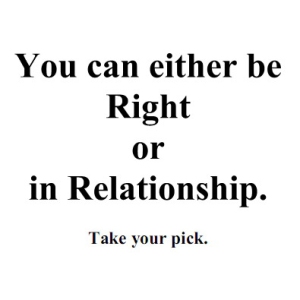 I recently posted the following on my personal Facebook page after speaking with some Gen Z people that I love deeply who are so troubled by their parent’s ideology and hard-lined way of thinking that they are contemplating removing their own parents from their lives. The young person in question messaged me to ask me if I would still feel the same about them if they did.
What are we doing to our kids?
Many years ago, I had a marriage counselor say to me, “You can be right, or you can have a relationship.” She went on to explain that many times we get so stuck in our view, our opinion, our rightness that we lose sight of the importance of the relationship. There are times we have to let go of being “right” in favor of the relationship.
While that marriage did, in fact, come to an end, that one sentence has changed how I interact in so many aspects of my life.
I am deeply troubled by the rifts that are forming between families in this election season. We no longer communicate to understand, rather collect like-minded people to us, and to ridicule anyone with a different view.
I see it so much along generational lines.
Young people being moved to activism, older family members telling them they don’t know anything, that their opinions count for less due to age.
*It happens on both sides, there is no political bent in what I am saying.
People, please, please remember that no matter the outcome, these people are your family.
Today.
On November 4th.
On January 20th.
Do we really want to risk relationships with our children, our grandchildren, over political ideology?
What if, instead of telling the younger generation to, “Live some life, then you can talk to me about ____.” We said sentences like, “Can you explain to me why you see it that way?” And then LISTENED to the reason?
What if we pulled our dialogs off of social media and held them face to face? With logic, facts, and open minds?
What if we discussed with the intent to understand the other person on a deeper level, and not to try to change their mind?
I do not agree with every sentiment that my children, nieces, nephew, and gen Z cousins state. I do, however, respect it as valid.
Gen Z lives in a completely different world than any generation before them. Their connectivity is unparalleled. The world they know has never existed before.
Maybe, those of us who came before can open ourselves up to attempting to understand their world, their beliefs, their culture, instead of complaining that they don’t model “the good ole days.”
BTW, when we take off the rose-colored glasses, the “good ole days” were not so “good” for many people.
Relationships matter.
There is not a political issue on this planet that I would be hard-lined enough about to damage, or lose, a relationship with my children, my nieces, my nephew, my Gen Z cousins.
Yes, hold to your beliefs.
Hold to your relationships more.
Do you want to be right, or do you want to have a relationship?
❤